I came across the word picaflor in Javier Marias’ novel Corazón tan blanco. A rather lovely word which is apparently on the brink of extinction, un picaflor can refer to one of two things. The principal meaning is hummingbird, although this animal would today be more commonly referred to in Spanish as un colibrí, or un pájaro mosca. ‘Picar’ in Spanish has some similarities to the English ‘pick’, in the sense of ‘to pick at food’, but the general sense of its many, many different shades of meaning is ‘to nibble, to wear down incrementally’. Thus, despite the fact the word picaflor might suggest ‘pick flowers’ to an English speaker, it in fact means something more like ‘flower-sipper’. The component ‘pica’ has an onomatopoeic touch, the staccato consonants suggesting something small but speedy; when the creators of Pokemon gave Pikachu his name they were presumably hoping to create precisely the same onomatopoeic effect.

The second meaning of picaflor is a metaphorical elaboration on its first. The dictionary of the Real Academia Española renders it as frívolo inconstante, ‘an inconstant, frivolous person’ – in other words, a flirt, a gadabout, a prodigal. The great charm of this meaning is the way that it evokes so concisely and elegantly the idea of the Wildean aesthete, flitting from flower to flower, staying only long enough to extract the nectar before becom
ing bored and moving on. Indeed, in Corazón tan blanco, the narrator’s father uses it to chide him, on his wedding day, about his recently-curtailed dissolution.

A hummingbird is an exquisitely lovely creature, and this is often reflected in the charming words different languages have for it: in Portuguese, for example, it is a beija-flor, a flower-kisser. Naturally, given that it is an American bird, the pre-Columbian languages all had or have a specific word for it: the Nahuatl huitzil seems to evoke the movement of the hummingbird’s wings, as do the Aymara luli, the Maya tznuum and the Navaho da-hi-tu-hi.

These poetic terms reminded me of an observation that Stephen Pinker makes in his The Stuff of Thought. He wonders why it is that, despite the fact that Western European languages share roots so ‘promiscuously’, nearly each one has its own word for butterfly: in German, Schmetterling; Dutch vlinder; Danish somerfugl; French papillon; Spanish mariposa; Italian farfalla; and Portuguese borboleta. He goes on to observe that many words for butterfly (most obviously, perhaps, the Papuan fefe-fefe) contain reduplicated consonant sounds, possibly intended to mirror the movement of the butterfly’s wings.

He leaves the question open, but goes on to cite the linguist Haj Ross in a passage which is well worth requoting, not least because a similar observation could be made about the humming-bird:

‘The concept/image of butterfly is a uniquely powerful one in the group minds of the world’s cultures, with its somewhat unpromising start as a caterpillar followed by its dazzling finish of visual symmetry, coupled with the motional unforgettability of the butterfly’s flipzagging path through our consciousnesses. Butterflies are such perfect symbols of transformation that almost no culture is content to accept another’s poetry for this mythic creature. Each language finds its own verbal beauty to celebrate the stunning salience of the butterfly’s being.’ 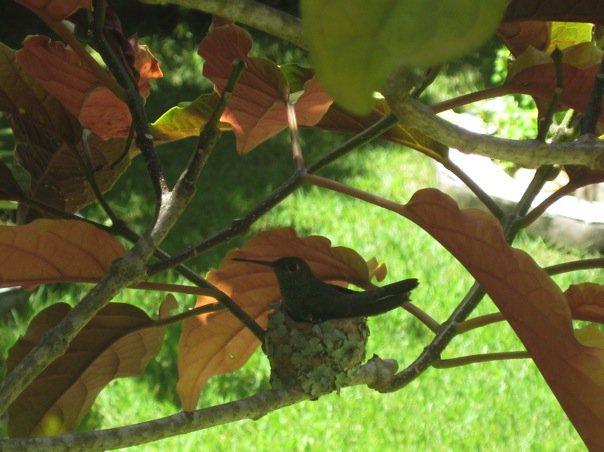 Um beija-flor on its nest; picture taken by the author in Saquarema, Brazil.

Georges Perec: not as easy as one assumes